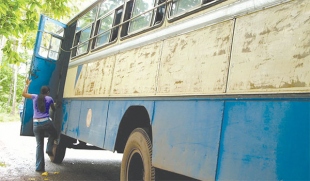 A better transport system will benefit everyone

The transport system must be sorted and made user-friendly. This involves allowing taxi services available in other states to be present in Goa. The government will have to make changes to the public transport system to make it more touristy

Goa Travel and Tourism Association Chairman Nilesh Shah in a media interaction with this newspaper said it is time for authorities to crack down on taxis not using taximeters as it affects the tourism in Goa. He also said that it is important for Goa to host services like Ola-Uber and above all needs to have better public transport services. He stressed that it was important for the state to ensure that tourists are not cheated by taxi drivers driving without a meter. Taxi drivers had a lot to say about the views expressed by the TTAG President. Shrikant, a driver at Mapusa, said it was rather distressing that people expressed such sentiments without being sensitive to the situation faced by taxi drivers. He said the government had ensured that a very large percentage of taxi drivers had meters in the cars, but had done nothing to tackle the problem of illegal taxis operating with impunity. He said many families don’t mind renting their cars and earning a pretty penny. Everyone, he said, was focused on blaming the taxi driver for all the problems the tourists had. It is a subject that is very sensitive as it is and that generates strong emotions. Rocky, who heads a taxi union in Bambolim, expressed frustration with the overall situation. He said: ‘The government has made it compulsory for taxis to have meters otherwise licenses will be revoked. It must be remembered especially in the south; hotels pay taxis to transport guests. Hotels have a package that they offer to customers. There is therefore no question of paying the taxi drivers”. Rocky went on to say that it was wrong to point the finger at taxi drivers for all the problems tourists are having. He said: “How many complaints have been filed against taxi drivers in Goa for the rape or murder of a tourist. Some hotels have their own cars which are used to transport guests. We sit outside and watch them come in and out. There is this CSR discourse and it would be nice if all these companies hired locals. Plans for a floating pier in the south will destroy local businesses. The government has done nothing for the industry. Tell me how many public toilets have been built on the road from Panjim to Margao. Instead of focusing on providing facilities for tourists, they seemed to focus on these issues. Giten Solanki, who recently visited Goa with his wife and stayed in the north, said it was very frustrating to depend on the local transport system which would stop working after some time at night anyway. He said: ‘I hired a car at the airport and drove the whole time I was there. It saved me a lot of hassle. I learned from my experience in the past. It would be nice if public transport could be available at a later time. Some facilities must be available to help people get around cheaply. This will help the economy. A northern-based hotelier who did not want to come forward said it was an issue that would not be resolved as it did not suit the interests of those affected. He said: “If we want locals to be involved in the business, there needs to be more services available that will hire locals. The public transport service is closed too early and something needs to be done about it. If facilities are offered, visitors or locals will travel and spend more. Today it is very expensive to travel at night between cities. These things need to be settled. And yes, Ola, Uber and Goa miles should be allowed to operate. They will use local resources anyway. Someone has to take this call and decide. The current system is not working. Seraffin Cotta was another smoldering, moiré hotelier who wanted to speak without reserve; The president of small and medium hotels said it was unfortunate that attention was focused on the issue of taxi drivers when the biggest problem was illegal tourism. Explaining himself, he said, “Wealthy tourists come and stay in their five-star rooms, which is a small percentage of business entering Goa. The rest of them and by that I mean eighty-seven percent are illegal. They are not staying in hotels but in bungalows or apartments owned by residents of Mumbai, Delhi and Bangalore. The state gains nothing from them. It needs to be sorted. Speaking of transportation, yes it is poor and it affects tourists but mostly locals too. It is ridiculous that every house has at least two cars and two bicycles. This is due to poor transportation facilities in the state. But first we have to solve this problem of illegal tourism. Forward-looking measures must be taken to address the issues plaguing the industry. The sooner this is done, the better the experience will be for locals and visitors interested in getting around the state.