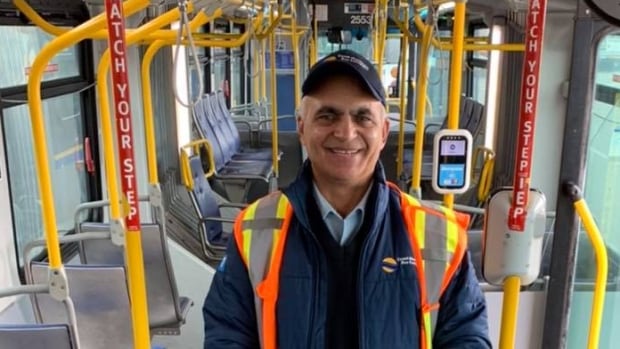 A longtime bus driver who was hospitalized in critical condition after being trapped between two buses in downtown Vancouver on Monday has died.

Friends and family of Charanjit Parhar told CBC that the experienced bus driver left his driver’s seat to remove the power poles connected to the overhead cables to power his bus to allow another driver, who was late. , to go past.

That’s when Parhar got stuck between two buses. Details of how and why this happened remain unclear, as the crash is under investigation by police and security officials.

Parhar was in his mid-sixties according to his brother Raja Parhar.

He described the loss of the devoted father and grandfather as “devastating” to the family.

Tilak Rahl said he had known Parhar for 30 years – they met in Punjab in northern India before immigrating to Canada.

“He has a wife and three beautiful daughters. He was so happy and he always goes to play with the grandchildren every weekend. He was a hard working guy with his feet on the ground,” he said. friend of the deceased.

He described Parhar as a smart, community-minded man who had previously worked as a welder and taxi driver before driving a bus.

Balbir Mann, president of Unifor Local 111, which represents more than 4,000 metro Vancouver transit operators, said he worked with Parhar years ago. He described him as “humble” and “caring”.

“Twenty-one at work and always had a smile on his face for everyone he met throughout the day,” Mann said. Parhar was treated by paramedics and taken to hospital with serious injuries and struggled to survive. Mann said the confirmation of the driver’s death caused “deep sadness” and said bereavement support will be available to other workers.

Mann said the “tragic accident” occurred around 8:20 am on West Cordova Street near Cambie Street and was being investigated by Vancouver Police and WorkSafeBC.