CARACAS, Venezuela (AP) — Ride-sharing apps like Uber, DiDi and Lyft may have traversed much of the world, but they haven’t yet arrived in Venezuela, where U.S. sanctions and years of hyperinflation and… Other misfortunes made it difficult to operate.

So a handful of local entrepreneurs have launched their own ride-sharing apps – and seem to be greeted by customers frustrated by scarce taxis, aging buses and a decrepit subway system.

Department store shopper Maria Arreaza, 39, had long relied on public transport to get to her downtown office and was intrigued by adverts for the new Ridery app, although initially skeptical.

“I said, ‘Well, I’m going to do a test.’ I made a service request and the app looked super cool,” she said. “I kept trying, I asked for more services… (and) then I became a high frequency user.”

So much so that when her mother spent nearly two months hospitalized with COVID-19, she requested at least four trips a day to the hospital and then back home or to work.

Ridery is one of at least three Venezuelan ride-sharing apps that have launched during the pandemic — and which have benefited from a de facto currency shift from the Venezuelan bolivar to the US dollar that has helped curb years of runaway inflation. . The new services set their prices in dollars and allow users to pay with bank cards or transfer services rather than bills.

Public transport across the country is a mix of public and private companies, all of which are in decline. Some of the buses around Caracas are so old they’ve earned nicknames like “The Immortal”, while others have proven too deadly due to lack of parts or maintenance.

Parts of the city’s subway system are often out of service. Meanwhile, fewer taxi ranks are operating around the city after years of hyperinflation and emigration wiped out much of the middle class that frequented them.

Pickpocketing, sweat and noxious fumes are common in street-level and underground transportation.

All also struggle with payment methods, in part due to the scarcity of bolivars. The public system does not accept foreign currencies and private operators cannot easily give people change when the fare is not rounded to the amounts corresponding to dollar bills: quarters, dimes and nickels are not in circulation.

And in a country rife with suspicion and distrust, app-provided information about driver, vehicle, price and route has attracted consumers.

“Everyone told us we were crazy, that no one here was going to get in a car with a stranger, and that’s why we went in with our own investment… see what would happen,” said Gerson Gomez, CEO and co-founder of Ridery, launched in March 2021.

“Delivery apps were already starting to grow in Venezuela. Dollarization had allowed common transactional means of e-commerce, such as credit cards, to be truly accepted in Venezuela, and also…you would hear from many people that the city is a little safer.”

Its main competitor, Yummy, which launched in 2020 as a delivery app and later expanded into carpooling, did not respond to an interview request.

Application services are not for everyone, however. The country’s monthly minimum wage is $30. Average monthly salaries in the private sector are less than $100. So even a $3 mile ride can be a big chunk of many budgets.

Gerzon said drivers make an average of more than $700 a month, before expenses like gas and maintenance. He added that he thinks ridesharing and delivery apps help even those who don’t use them.

“If someone who works in your store and makes $50 tells you that they are going to leave because they are going to work in delivery with a motorcycle that a cousin is going to lend them and they are going to make $400 a month , you are forced to raise the salary,” Gerzon said. “I think these apps have helped in the cities, where they’re pushing up wages a bit.”

App rides tend to be cheaper than taxi prices, although so far they haven’t sparked the kind of large-scale protests seen among taxi drivers in other countries.

And some drivers say they haven’t seen the kind of benefits they were hoping for.

After seeing adverts on social media, William Devia passed the vehicle inspection and interview to become a driver for an application in October. He’s been a cab driver for 10 years, and since taxis in Caracas are only marked with dome lights — no special paint schemes or additional signage — he figured he could try the app.

“The customer will always look for the cheapest,” Devia said. “Everyone takes care of their own wallet. It wasn’t profitable because they (the apps) demand a lot – that the car doesn’t have a single scratch – for how little you’re going to earn.”

But for Angel Altuve, the 10 rides he strives for each day help supplement his $30 monthly pension. Altuve was fired from his managerial position after 20 years due to the country’s crisis.


Employees work at the Ridery ridesharing apps headquarters in Caracas, Venezuela, Wednesday, May 4, 2022. The new services set their prices in dollars and allow passengers to pay with bank cards or transfer services rather than bills. (AP Photo/Matias Delacroix) 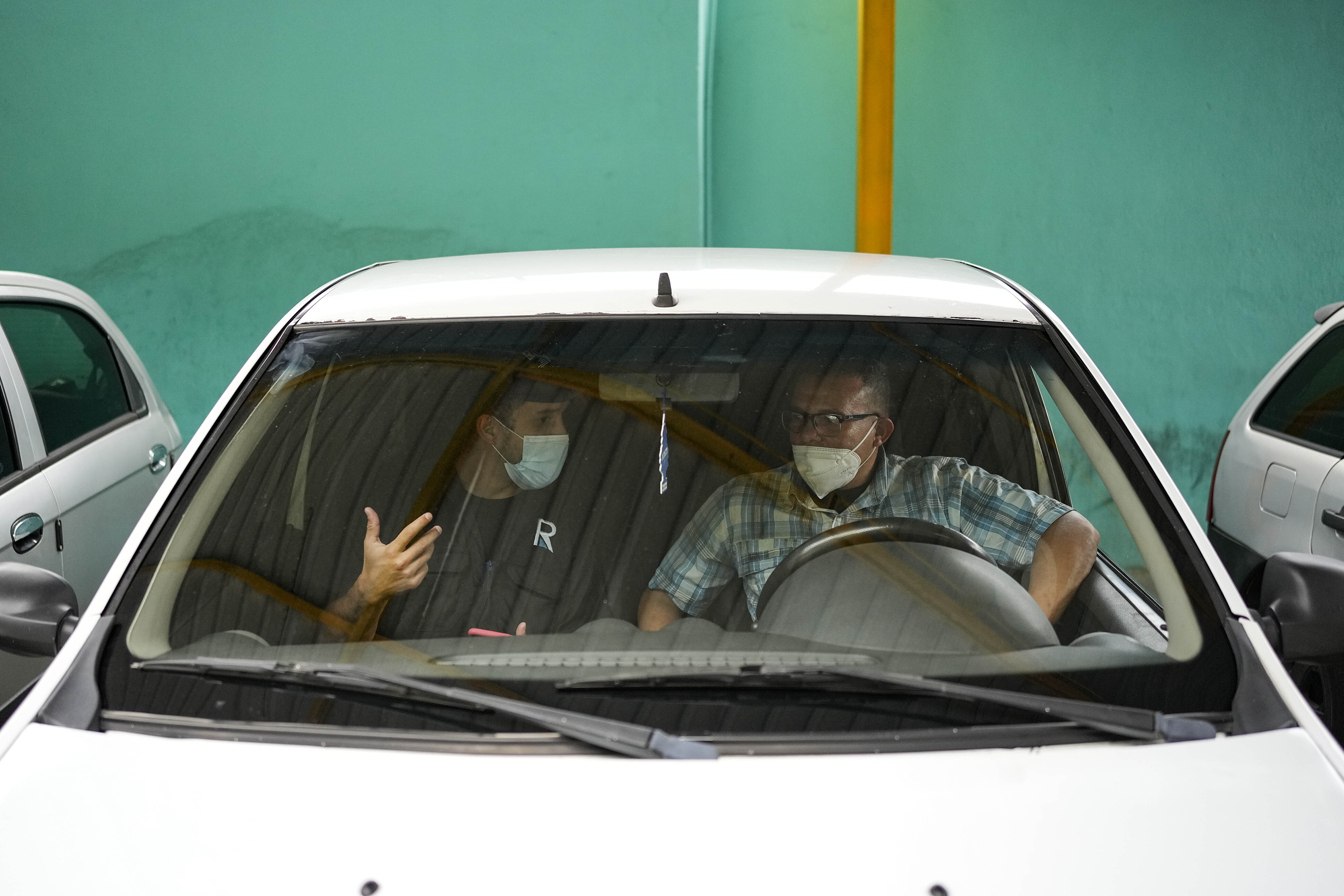 An employee gives advice to a driver to move into the next phase of recruitment at Ridery’s headquarters in Caracas, Venezuela, Wednesday, May 4, 2022. Ridery is one of at least three Venezuelan ride-sharing apps that have been launched during the pandemic. (AP Photo/Matias Delacroix) 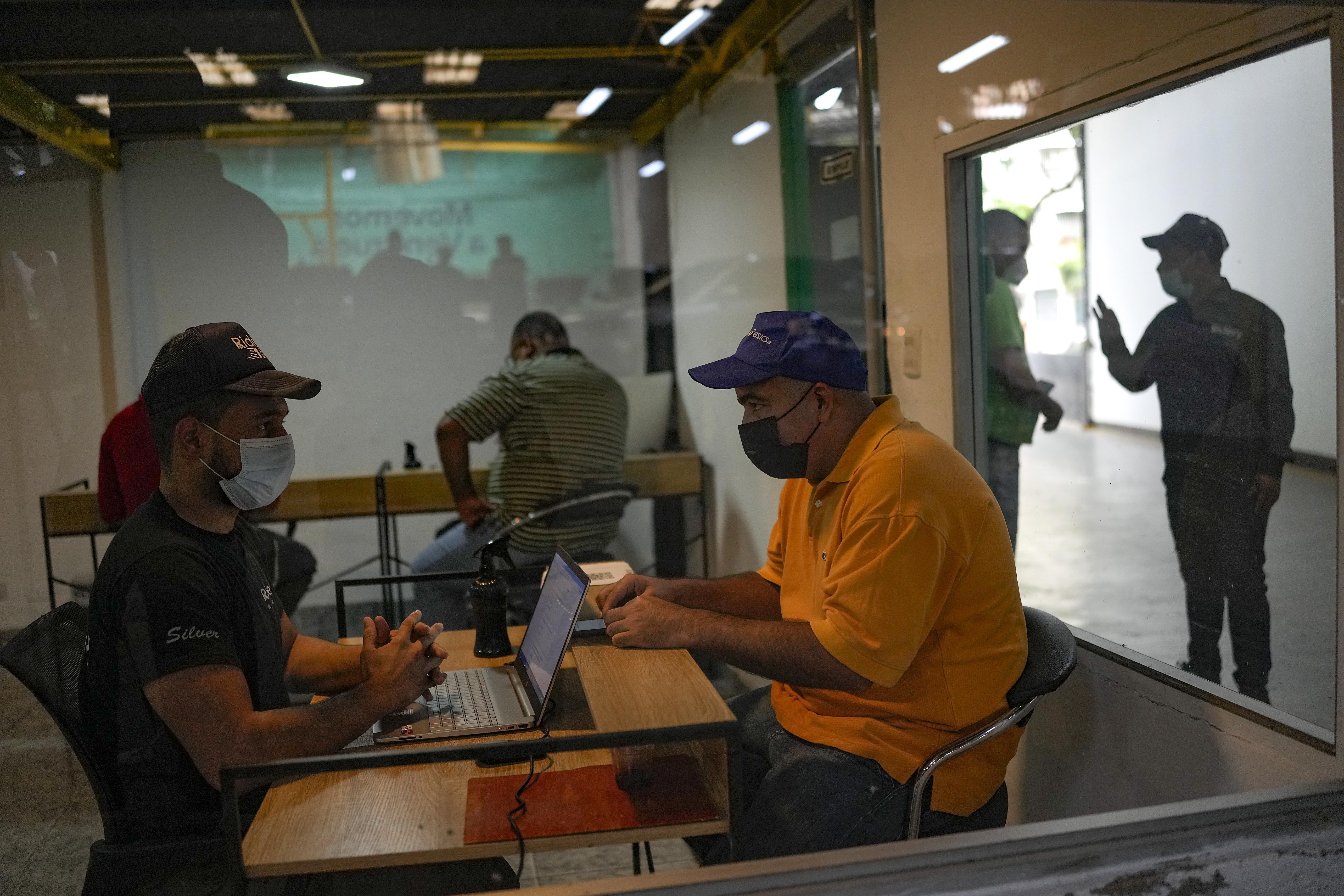 A driver is interviewed at Ridery’s headquarters in Caracas, Venezuela, Wednesday, May 4, 2022. Ridery is one of at least three Venezuelan ride-sharing apps launched during the pandemic – and which have benefited from a de facto currency shift from the Venezuelan bolivar to the US dollar. (AP Photo/Matias Delacroix) 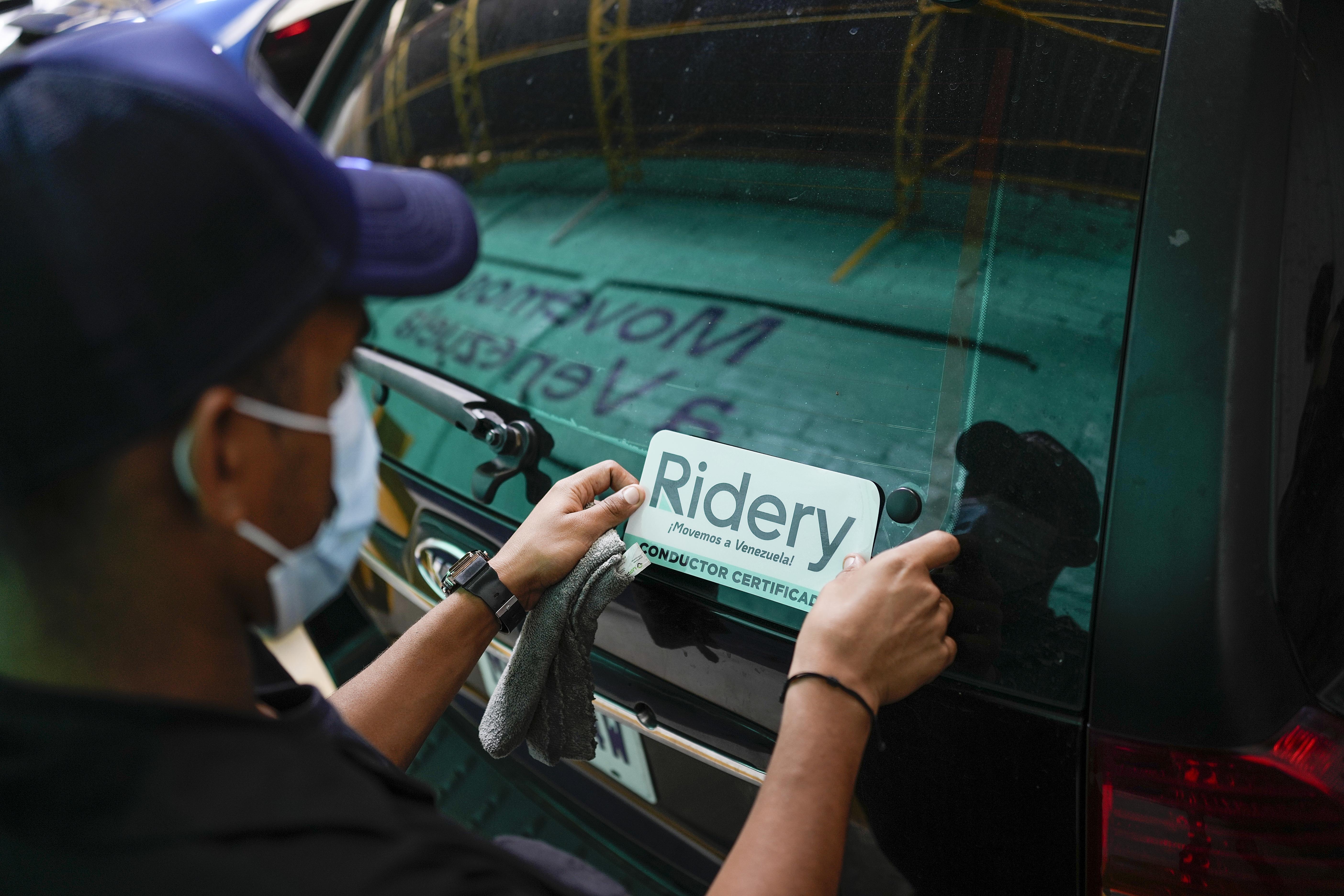 An employee places a promotional sticker on a vehicle at Ridery’s headquarters in Caracas, Venezuela, Wednesday, May 4, 2022. Ridery is one of three Venezuelan ride-sharing apps launched during the pandemic – and which benefited from a swing of de facto currencies from the Venezuelan bolivar to the US dollar. (AP Photo/Matias Delacroix) 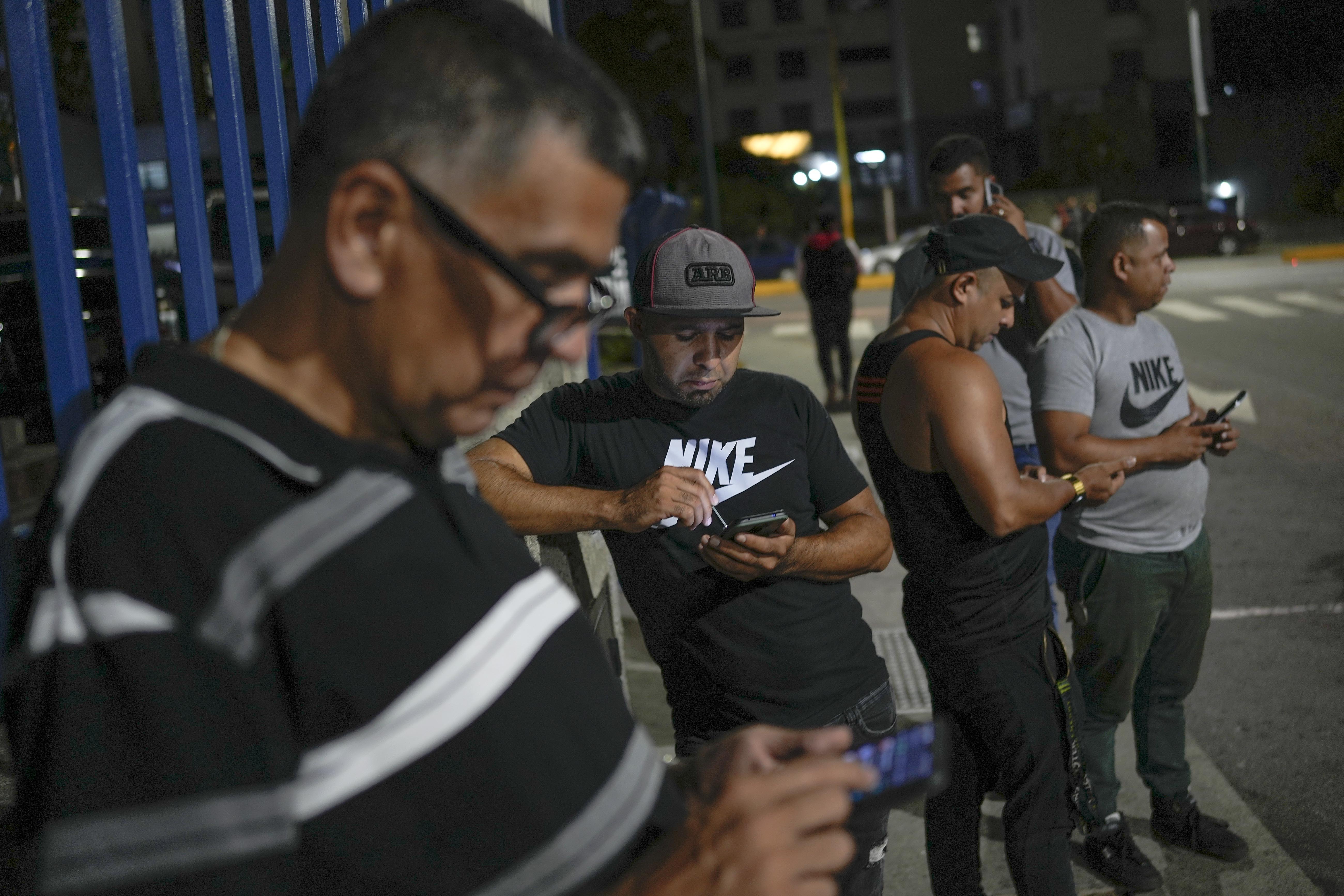 Ridery drivers monitor their cellphones for customers near a shopping mall in Caracas, Venezuela, Thursday, May 5, 2022. Ridery is one of at least three Venezuelan ride-sharing apps that have been launched during the pandemic – and who took advantage of a de facto currency change from the Venezuelan bolivar to the US dollar. (AP Photo/Matias Delacroix) 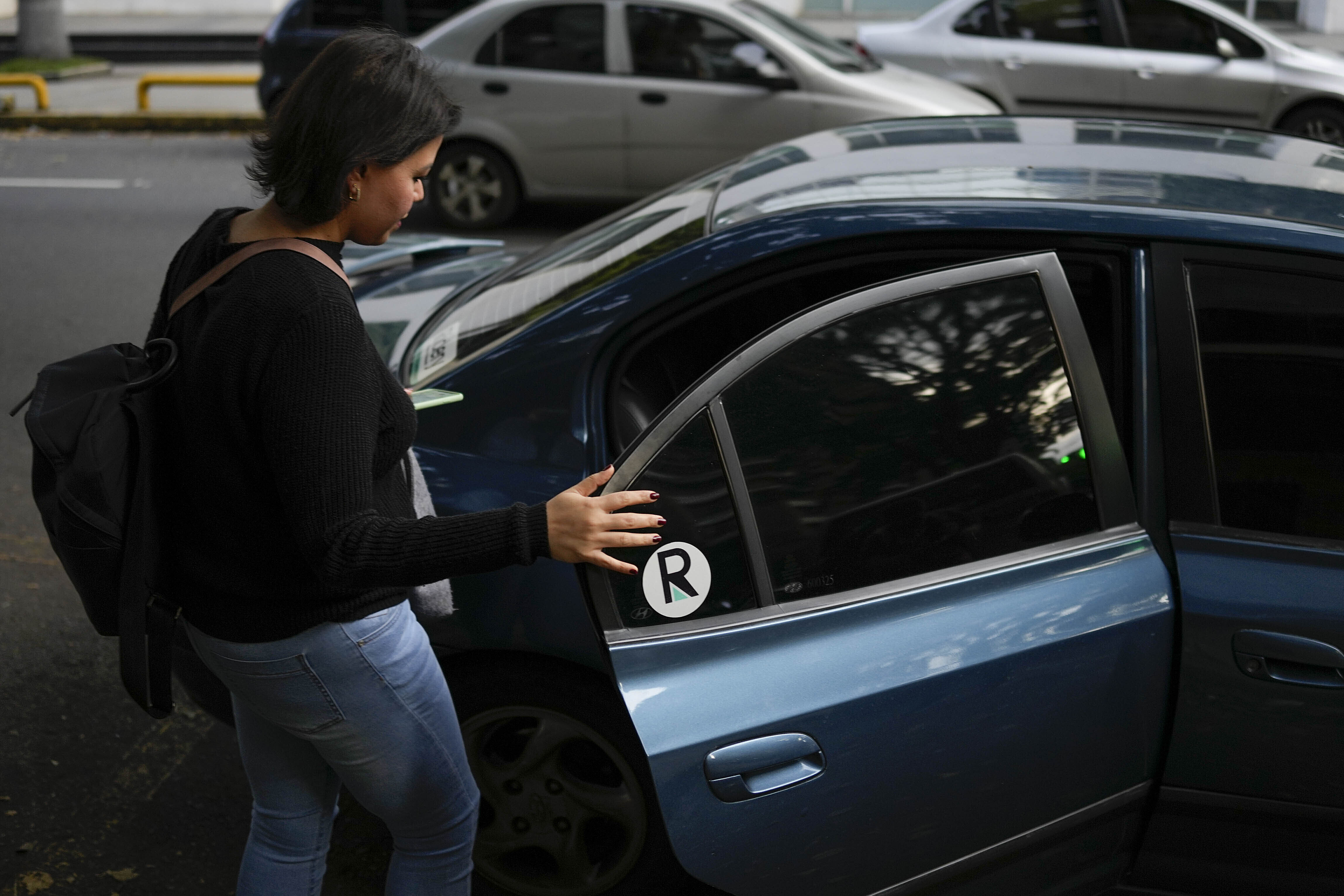 Department store shopper Maria Arreaza rides in a Ridery car she requested, outside of her job in Caracas, Venezuela, Thursday, May 5, 2022. Arreaza, 39, had long relied on public transportation to get to drive to her downtown office and was intrigued by the advertisements for the new Ridery app, although initially skeptical, she is now a frequent Ridery user. (AP Photo/Matias Delacroix) 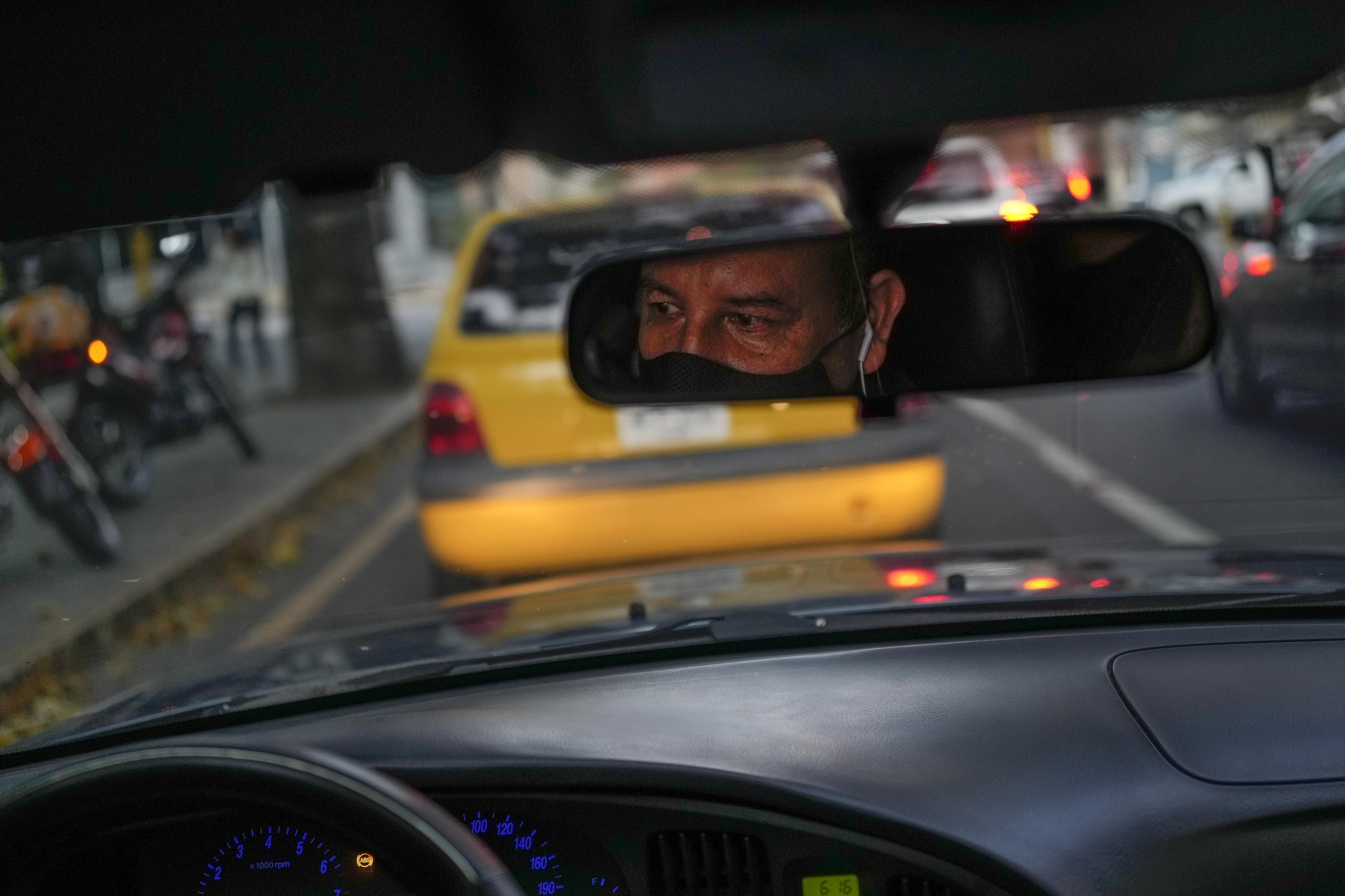 Ridery driver Marcelo Sanchez is reflected in the rear view mirror of his car in Caracas, Venezuela, Thursday, May 5, 2022. “I used to work as a private taxi for a hotel, but it closed. I have worked with Ridery for a month and it’s not bad,” Sanchez said. (AP Photo/Matias Delacroix)