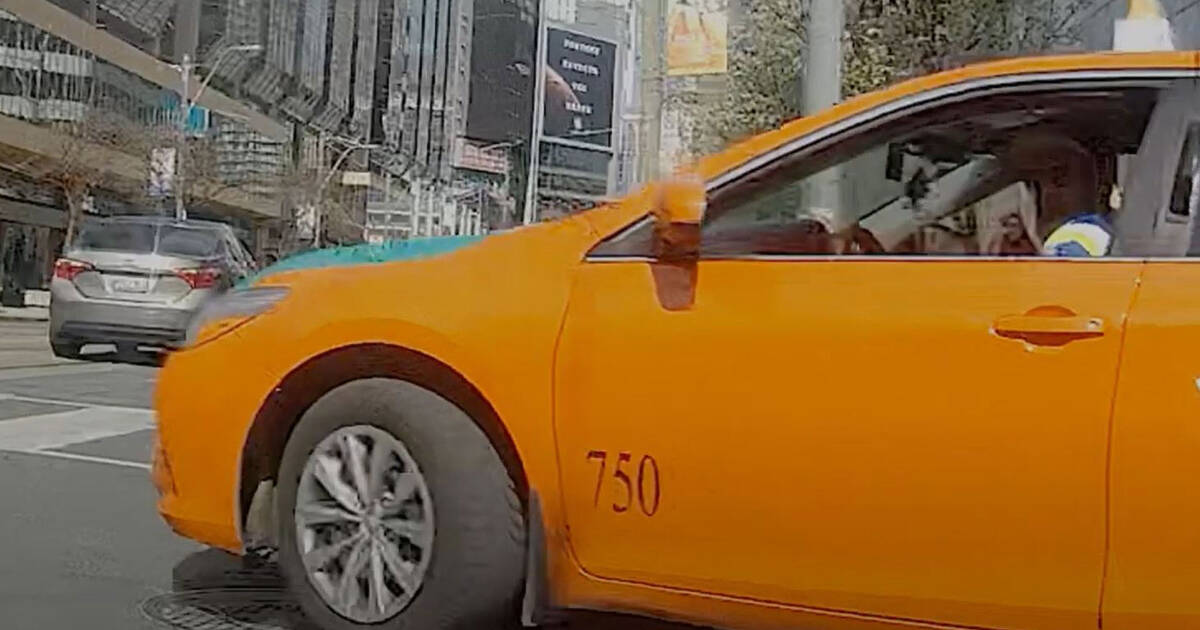 Just getting from place to place on a bike can be a frustrating and sometimes harrowing experience in Toronto, and even with plenty of infrastructure at their disposal, cyclists all too often feel like they’re risking their lives in this city.

In another disturbing example of reckless driving in Toronto captured on video, a cyclist was lucky to escape unscathed and a taxi driver ended up with a work suspension after an incident downtown on Tuesday.

Cyclist Carl Heindl, who recorded the incident, tells blogTO that he commutes on his bike daily and rides for a living, but is concerned about the lack of traffic control which he says cements bad driving habits in the city.

Video evidence: Beck taxi #750, almost makes me stop running red light, turns in wrong lane, goes to another red light. I see this stuff every day in the city with what looks like a lousy app. https://t.co/L1BQH1pGDk@BeckTaxi @TPSOOperations @TorontoPolice @blogTO

Heindl says that “People used to slow down at least to cross a red, which is bad enough, but take my video from yesterday – the taxi driver rushed at the red light and if I was one meter or two ahead I’m afraid I would have been hospitalized He then turned into the wrong lane and then you can see the driver running the red light soon after at Yonge St. as well.

“With the Lake Shore Bike Path in ruins and the sad attempt at an afterthought detour putting cyclists through dangerous gravel and cement trucks on the Commissioners near Cherry St., Dundas St. appears to be one of the only ‘safe’ east-west roads with a bike lane except for the city centre, but maybe I’m wrong.

After the incident where Beck Taxi narrowly missed hitting his bike, Heindl says he filed a police report and informed the taxi company.

Kristine Hubbard, operations manager at Beck Taxi, told blogTO that “the vehicle and driver were immediately suspended” following Heindl’s report, and added that “there will definitely be an investigation and we will also refer to this driver’s history to see if there have been any concerns or previous discussions regarding safe driving.”

Unacceptable. This vehicle and its driver have been suspended. Thanks for sharing the video and we’re glad you weren’t hurt. He will answer for the behavior.

Hubbards says “this is absolutely unacceptable and I’m just glad no one was hurt. I’m also glad the video captured everything we need to move forward with appropriate actions to avoid a another close call.”

She adds that in such cases, she encourages cyclists to file formal complaints with Municipal Licensing & Standards, the licensing body that would allow the driver to continue operating with a taxi company or independently.

Lawyer and cycling advocate Dave Shellnutt was heartbroken by the content of the video, telling blogTO that it “captures the lawful, negligent and dangerous driving that we cyclists and other vulnerable road users are accustomed”, adding that these incidents “no longer shock us”. It’s the norm.”

Sorry to see this Carl but glad you’re okay! Be sure to file a CORE report online with TPS, this driver could have seriously injured you and will likely injure someone else in the future.

Shellnutt argues that “successive enforcement failures, ineffective penalties, and infrastructure changes at a snail’s pace are breeding a culture where the car is king and this neglect happens frequently.”

“The driver, putting his own interests or those of his passengers above our collective safety, blew up a red, pedestrian walk signal at one of the nation’s busiest intersections. The result could have been pedestrians and our cyclist Carl dead and/or seriously injured.”

Shellnutt is demanding urgent action from the city, saying that “as people return to work and life outside the confines of their COVID-19 bubbles flourishes, horrendous driving behavior and more people in displacement will result in widespread and ongoing road damage/violence”.

“We need leadership from all levels of government to create, promote and secure safe streets now.”