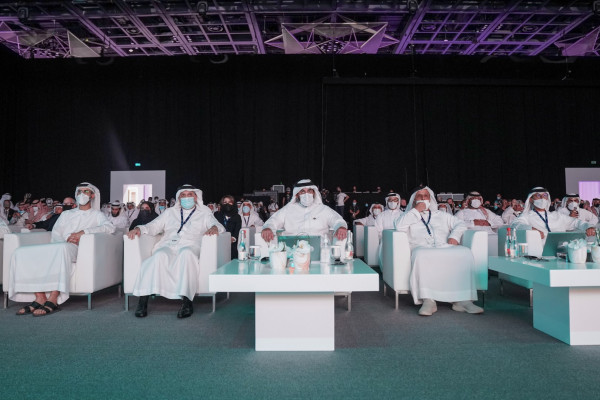 With a total of 100 international companies and start-ups, the event, which runs from November 7-10, will see 250 road and infrastructure specialists share their perspectives in more than 70 sessions and panel discussions.

Sheikh Ahmed was received by Mattar Mohammed Al Tayer, Managing Director, Chairman of the Board of the Roads and Transport Authority (RTA), and Abdullah Al-Mogbel, IRF Global Chairman.

The main participants in the event included Suhail Al Mazrouei, Minister of Energy and Infrastructure; Omar bin Sultan Al Olama, Minister of State for Artificial Intelligence, Digital Economy and Remote Work Applications; in addition to the directors general of a number of ministries, senior civil servants and representatives of local and international companies.

Sheikh Ahmed and participants watched a video on the importance of investments in roads and transport networks, and their essential role in promoting rapid growth and sustainable economic development.

Al Tayer gave an opening speech in which he welcomed participants and attendees to the meeting. “Under the leadership of His Highness Sheikh Mohammed bin Rashid Al Maktoum, Vice President and Prime Minister of the United Arab Emirates and Ruler of Dubai, and the follow up of His Highness Sheikh Hamdan bin Mohammed bin Rashid Al Maktoum, Crown Prince of Dubai and Chairman of the Executive Council, the government of Dubai has made sustained investments in improving infrastructure and transport, which it sees as a key driver of economic growth and development. -2017, according to the published Global Competitiveness Report by the World Economic Forum, ”said Al Tayer.

“Since 2006, the government of Dubai has spent more than AED 140 billion in improving roads and transport infrastructure to meet needs resulting from urbanization and rapid economic development, as well as to improve the happiness of RTA has made massive infrastructure improvements with the length of the road network increasing from 8,715 kilometers of track in 2006 to 18,255 kilometers of track in 2020. RTA has used advanced intelligent systems and 4th revolution technologies industries, such as artificial intelligence, big data and the Internet of Things, to expand traffic coverage, ”commented Al Tayer.

Speaking of meeting the demands arising from the urban and population growth expected in the future, Al Tayer said: “Smart mobility is one of the key pillars of future cities that prioritizes the well-being of the population. As part of the vision to transform Dubai into the smartest and happiest city in the world, His Highness Sheikh Mohammed bin Rashid Al Maktoum endorsed Dubai’s Smart Strategy for Autonomous Transportation which aims to convert 25% of total Dubai mobility journeys in driverless intelligent journeys by 2030. RTA completes trials of autonomous air taxis, autonomous taxi operation and study of suspended transport systems.

Ing. Abdullah Al-Mogbel, IRF Global President, said: “This IRF global meeting and exhibition articulates the key objectives of the IRF established in 1948. The objectives are to ensure that the roads and transportation sector keeps pace with the latest technical and scientific developments and to promote a greater exchange of ideas and experiences in the field. The COVID-19 pandemic has caused changes in the movement of people and goods in the recent past. It required non-traditional solutions to ensure the smooth flow of goods, especially food and medicine. pandemic, the transportation sector has been resilient enough to adapt to the unprecedented conditions for providing transportation services to societies. He focused on digital infrastructure to reach the best means of communication and ensure the necessary supplies.

“The IRF was able to adapt quickly to the challenges posed by the pandemic and provide virtual tools to disseminate information and organize trainings and conferences. The number of beneficiaries of our training and education programs in 2020 exceeded 5,000 technicians and specialists from 100 countries.

Lord Philip Hammond – former Chancellor of the Exchequer of the United Kingdom, gave a keynote address in which he highlighted the role of governments in preparing the transport sector for future challenges, and the importance of targeted investments and policies designed to support transport innovation and sustainability.

Sheikh Ahmed bin Mohammed bin Rashid Al Maktoum honored Khaled Al-Hogail, Managing Director and Executive Director of Saudi Public Transport Company, winner of the IRF Man of the Year Award 2021. Al-Hogail was honored in recognition of his many achievements in the field of transport in Saudi Arabia and his efforts as president of the International Association of Public Transport.

His Royal Highness Sheikh Ahmed bin Mohammed also honored the sponsors of the event as well as the keynote speaker Lord Philip Hammond, following which he opened the exhibition.