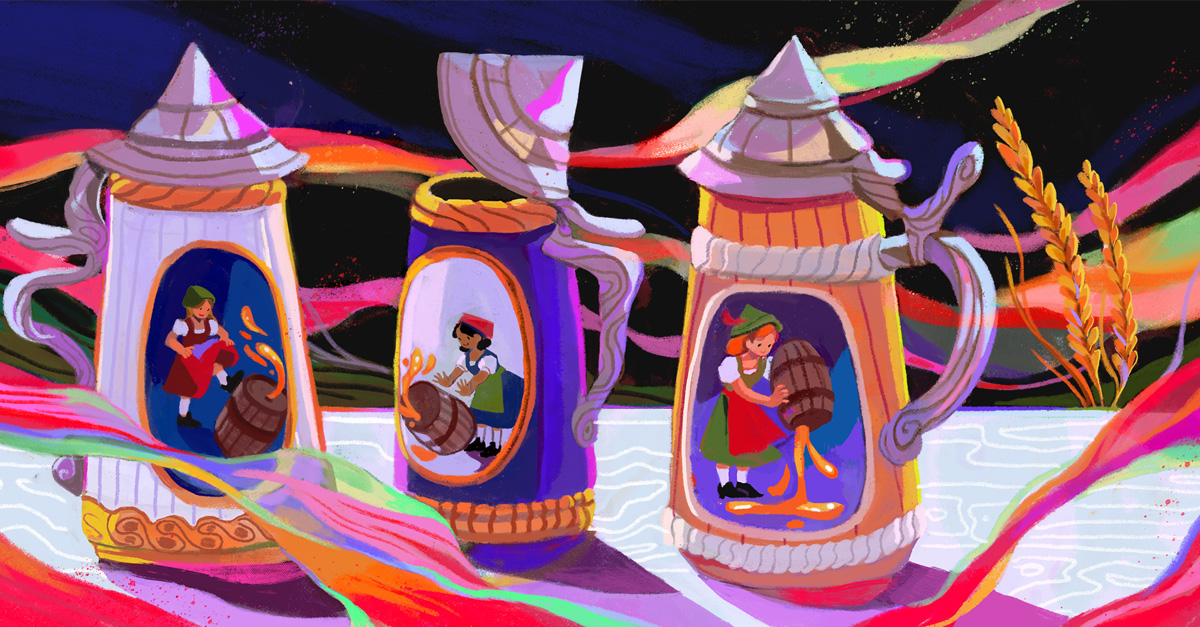 It is around 11 am when I arrive at the Amtrak train at Penn Station. I’ve been up for less than an hour, remembering that I have to go to Connecticut today for a â€œSober Oktoberfestâ€. Ironically, I have a bit of a hangover. Gather a group of reporters in a room and two glasses become seven glasses before you can write your own signature. I’m leaving for Connecticut, however, not because I’m participating in #SoberOctober (obviously), but because this beer festival is hosted by Athletic Brewing – a relatively young brewery, founded in 2018, with one of its bi-coastal offices near Stratford, Connecticut – and I was sent to see what this no-drink festival is all about.

You may already be familiar with this brand of non-alcoholic beer. In this case, I’m assuming you’re taking part in triathlons, trail running competitions, or other feats of physical endurance for fun, because that’s what their fans all seem to have in common. Full Disclosure: I don’t compete in triathlons, but did run a bit of cross country in college and have my fully brewed beer 99% of the time. (The 1% being every time a college party only had Natty Lite, which is just water with yellow food coloring.) That is, I mostly know speak in the athlete’s mother tongue. But today is the first time that I have voluntarily taken alcohol-free beer.

Maybe that’s why, while healing the last moments of a hangover, I stop at a bodega near Penn Station and grab two bottles of Jack Daniel’s Plane and one of Fireball. (Who knows what kind of supplies I’ll need later?) Fireball’s cinnamon shot is a weirdly nice combination with my Amtrak coffee – it’s like a smuggled pumpkin spice latte. The rest of the hangover decreases.

Get the latest in beer, wine and cocktail culture straight to your inbox.

Getting off the train 90 minutes later, I switch to a local taxi service, which takes me to â€œOktoberfestâ€. As I collect my notes for this day without drinking, the futility of it all begins to set in. As every parent of a high school student rightly insists, you don’t have to drink to have fun. I think that’s true, of course. But why would you choose to go to a Sober Oktoberfest to prove this point? It would be like saying, “You don’t have to know anything about tennis to have fun” and then buy tickets to Wimbledon. This whole festival, since its inception in Munich in 1810, has been about way too much drinking and shameless fun. If you’re the type of person who doesn’t drink, that’s cool! But why don’t we all go to the movies or a restaurant or something like that rather than insist that we always have fun drinking without drinking. To that end, I never really understood the concept of non-alcoholic beer either. I love a dirty Martini, but it’s not because of the flavor. Does anyone really like the taste of alcohol if they know that the effects of alcohol don’t follow closely with every sip? Isn’t that why there are so many different kinds of juices and kombuchas in supermarkets that you want to drink instead of alcohol?

As you get out of the taxi, a few picnic tables are set up around a stage and the smell of pretzels hangs in the air. Everyone here is very clearly an athlete. And I don’t mean that like in “Everyone here clearly likes sports or is in good shape”. I think of it as in “It’s quite possible that these people swam, biked or ran to this same parking lot.” Again, the idea occurred to me to wonder what these people love so much about non-alcoholic beer to take advantage of this concept. Do you know what else is delicious? Gatorade. Personally, I like Gatorade much better than beer. I will even have it without practicing sometimes. So what are we all doing here?

For $ 35, I pay the entrance fee, which allows me to eat at two local restaurants and all the non-alcoholic beer refills I want. I stop at the counter, where I see that the company is not organizing this festival at random, but because it coincides with the release of its new beer Oktoberfest. Oddly, seeing capitalism at work in this way calms me down, rather than thinking that everyone at Athletic Brewing thought this alcohol-free festival was just a cool event. I grab a pint of Oktoberfest, grab some food in the locals’ favorite Walrus Alley, and sit down at a picnic table.

The food is great, but the â€œbeerâ€ isâ€¦ wellâ€¦ beer-like. It tastes like beer. Almost exactly, to my knowledge. I don’t mean to say that it tastes simple or bland either. I mean for this non-alcoholic beer to have such a similar flavor profile to alcoholic beer, arguably the most important aspect of beer, is an impressive feat. I don’t come home to fill my fridge, but I understand why all these cyclists come here between playing cornhole and shouting Bon Jovi at karaoke nights. (I guess that’s what they do, at least. They look like that.)

I mostly have this review because halfway through my beer, a guy in lycra bike shorts sits down next to me, takes off his plunge-back bike helmet (the kind you’d see in the Tour). from France) and wonder where I got my drink. He leaves and returns a moment later, talking about the beauty of the weather. These are the kinds of conversations you’re doomed to have when you’re not drinking, I guess. Trying to return his politeness, I ask him about his bike, a CervÃ©lo with a carbon frame. I know a bit about cycling from working in a bicycle shop in high school. So we talk about it before he asks which model I ride. “Citi” is all I can get out of it. He doesn’t understand the joke. I take another sip as he pulls off his bike shoes. As he tells me how much he loves hanging out around town – this Murray Hill bar is like his second home – I remember it’s time for me to go out.

Back on the train, I’m completely parched, ready for another Oktoberfest beer even. Now that’s probably not advisable if you’re the type of person to buy non-alcoholic beer from Athletic Brewing in the first place, but if you drink about a third of it then throw in a Jack-sized bottle. of an airline. Daniel’s, it’s going really well on the train ride back to Manhattan.