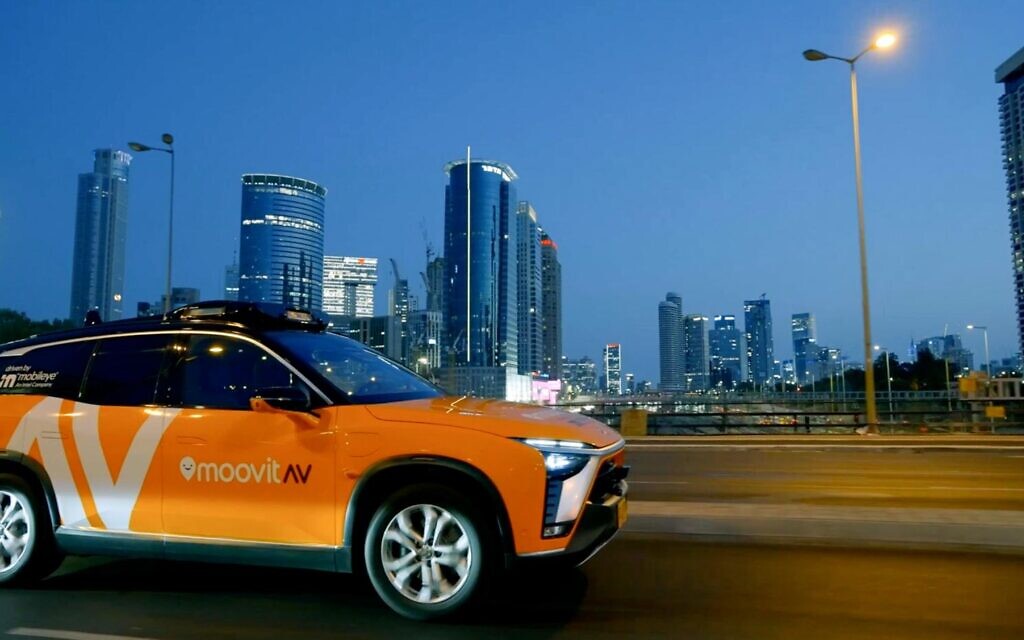 Intel’s Mobileye, the Jerusalem-based self-driving tech maker, this week unveiled a 40-minute self-driving car ride around Jerusalem ahead of the company’s planned launch later this year of a full pilot. for self-driving taxis and public transport services in Munich and Tel Aviv.

The video shows the vehicle operating in autonomous mode “while mimicking the multi-stop behavior of a transportation service with human proficiency,” Mobileye said, and shows its Mobileye Drive system with Level 4 autonomous vehicle technology, which offers high automation without the need for human intervention in limited areas (also called geofencing). Humans can still manually override if needed.

The footage, filmed from inside the vehicle, shows the car maneuvering through the narrow streets of the capital at night, stopping at traffic lights while keeping motorbikes and scooters in mind, navigating around pedestrians who crossing the street and even waiting patiently at the green light at a busy intersection. as a human driver in another car makes an illegal U-turn.

Mobileye said in an announcement on Tuesday that such testing marked a “major milestone” for the Intel subsidiary ahead of the launch of robotaxi (robotic/self-driving taxi) services in Israel and Germany.

The company has partnered with German car rental and mobility services giant Sixt SE and Israeli smart transport data company Moovit (acquired by Intel in 2020 for $900 million) for transport services.

Mobileye will own the fleet of vehicles – orange NIO SE8s, seven-seat electric SUVs made by Chinese electric vehicle (EV) maker NIO powered by Mobileye Drive, and developed specifically for commercial driverless transportation services, while that Sixt will maintain and operate them in Israel and Germany.

Passengers will be able to access the service on the app developed by Moovit, as well as the Sixt app, which combines carpooling, car rental, car sharing and other offerings.

Mobileye has begun the licensing and regulatory approval process in Israel and Germany to move forward with its plans. Last month, the Knesset passed a law that will allow Mobileye and other companies to pilot self-driving shared transport, with passengers in the vehicle but no safety driver on Israeli roads.

Mobileye has banked on commercial robotaxi services, as well as self-driving shuttles for public transport across Europe and delivery vehicles in the United States, as the first introduction of self-driving cars on the roads.

The Mobileye Mobileye Drive self-driving system consists of three parts. The first is advanced vision sensing technology, which Mobileye calls True redundancymade up of two perception subsystems that the company says allow for better security and validation because they operate independently of each other.

The second is Mobileye’s crowd-sourced Road Experience Management (REM) mapping technology, which creates high-definition maps of road infrastructure around the world to serve as the basis for safe autonomous driving. According to Mobileye, this technology generates data on more than 15 million kilometers (about 9.3 million miles) of roads daily.

The final piece is Mobileye’s “pioneering” Accountability Sensitive Security (RSS) conduct policy, which, according to the company’s co-founder and CEO, Amnon Shashua, “supports rapid scaling in all parts of the world with different driving cultures”.

Johann Jungwirth, vice president of mobility as a service at Mobileye, said Mobileye Drive “defies industry standards with separate sensing subsystems that act as backups to each other. The very whose vehicle navigates in very complex scenarios proves the value of this approach.

​Mobileye Vice President Johann Jungwirth takes viewers on a virtual ride through the streets of Jerusalem with the self-driving vehicle equipped with Mobileye Drive, April 12, 2022. (Mobileye, an Intel company)

The initiative aims to examine the feasibility of integrating autonomous vehicles into the public transport system in Israel and connecting transport operators and innovative technology companies in Israel and around the world.

“The initiative will also map the infrastructure needed to operate an autonomous public transport system, and support and test the business plan of public transport operators, with the intention that within a year or two , companies that successfully complete the pilot project are given the opportunity to commercially operate public transport services in Israel,” the Israel Innovation Authority said.

Michal Frank, director general of the Ministry of Transportation and Road Safety, said in the announcement that the initiative was “a direct continuation of legislation recently passed in the Knesset, allowing the commercial operation of self-driving vehicles.”

“The Smart Transportation Initiative is expected to provide tremendous help with one of the biggest challenges facing the State of Israel: traffic congestion,” said Dror Bin, CEO of the Israel Innovation Authority. “Shifting to autonomous, driverless bus fleets will help streamline the public transport system, improve safety and address driver shortages – all within a few years.”

We tell a critical story

Israel is now a much bigger player on the world stage than its size suggests. As a diplomatic correspondent for The Times of Israel, I am well aware that Israel’s security, strategy and national interests are always under scrutiny and have serious implications.

It takes poise, determination, and knowledge to accurately convey the story of Israel, and I come to work every day aiming to do just that.

Financial support from readers like you allows me to travel to witness both the war (I have just returned from a report in Ukraine) and the signing of historic agreements. And it keeps The Times of Israel the place readers around the world turn to for accurate information about Israel’s relationship with the world.

If it’s important to you that independent, factual coverage of Israel’s role in the world exists and thrives, I urge you to support our work. Will you join the Times of Israel community today?

yes i will give

yes i will give

Already a member? Log in to stop seeing this

You are a dedicated reader

We’re really glad you read X Articles from The Times of Israel over the past month.

That’s why we started The Times of Israel ten years ago – to provide discerning readers like you with must-read coverage of Israel and the Jewish world.

So now we have a request. Unlike other media, we don’t have a paywall in place. But since the journalism we do is expensive, we invite readers to whom The Times of Israel has become important to support our work by joining The Times of Israel community.

For just $6 a month, you can help support our quality journalism while benefiting from The Times of Israel WITHOUT ADVERTISINGas well as access Exclusive Content only available to members of the Times of Israel community.

Thanks,
David Horovitz, founding editor of The Times of Israel

Already a member? Log in to stop seeing this