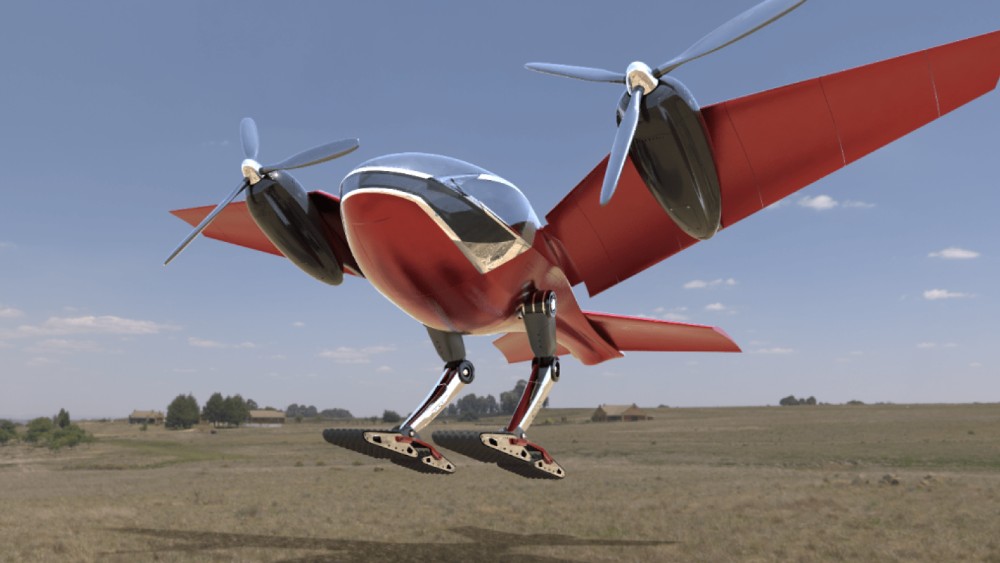 “Just a good old-fashioned airplane name (no alphanumeric, no special characters),” they write. “On the other hand, bats are the only mammals capable of flight and the Macrobat facilitates the flight of another type of mammal (badum-tish).”

Based in South Africa, the engineers bring a disruptive attitude to the already disruptive eVTOL industry.

The unique “legs” allow the aircraft to take off in an “almost” vertical position so that it can immediately begin its forward flight.

The proposed machine is a single-seater with a bulbous body and twin propellers. Written in a long poem, company video explains that engineers designed a wing that generates lift at low speeds, but additional details cannot be revealed as the design is patent pending.

A battery bank will power a pair of large propellers that push the Macrobat to 110 mph with a range of 90 miles and a load capacity of 330 pounds. A pilot can either fly it or a ground operator can operate it remotely like a drone to carry passengers or cargo. The bases of the legs are caterpillars, like those that can be found on a tank. This gives it some mobility, but limits its ability to roll on the ground.

Upon departure, the body and wings tilt back to allow what Phractyl calls an “almost vertical” takeoff, which will make Macrobat the first eNVTOL, according to the company. The avian-looking legs then retract during flight. This design allows the Macroboat to take off and land on uneven surfaces.

Once in flight, the Macrobat’s legs retract.

The ability to land off-road aligns with the larger mission of the Macrobat. Despite the flippant corporate message, it is a noble message: “Addressing Africa’s most critical transport challenges”, which includes “the mobility of people and things to areas that are not not easily accessible by land transport ”.